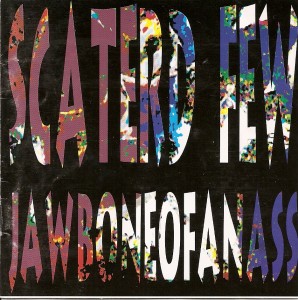 Jawboneofanass was an independent release by Scaterd-Few’s own label Sopa Records.  Its musical direction was more along the alternative rock genre yet it was also an eclectic musical CD.  With elements of punk, fusion, funk, jazz, rock, and even a ballad partly sung in Spanish, Jawbone was an obvious progression of musical growth for the band.

I have fond memories of the sessions for this album as we had cause to record it three times.  The first two recordings were marred in legal issues and once that was resolved we chose to do it ourselves.

Musically, it is my favorite of the three Scaterd-Few CDs I had the pleasure of playing on.  Not only do I feel that the bass lines and bass sound on this disk represent me quite well but the guitar work by Paul Figueroa, drums of Samuel West, keyboards of my brother Drew, and the vocals of my brother Allan are impressive on their own.  It is a well written and performed CD.

I hold nothing back on this CD.  All the tricks in my bag from slapping, slides, hammer-on’s, harmonics, and chords are all represented on this recording.

If you can find a copy of this CD on line, I promise you that you will not regret purchasing this disk.