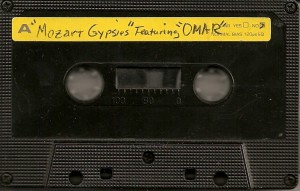 The demos were for a project he was calling “Mozart Gypsies”.  The songs were a type of ’60’s retro pop and fun songs to play.  The titles of the songs were “Oh! Suzanne”, “You’ll Feel Fine”, and “Crush Me Crush Me”.

I mention it here because it was my second paying studio session and meant a lot to me at the time.  It confirmed in my heart that I had the skills to play for someone else and enhance their music.  Thanks Mike for the ego boost so long ago.

In the 2nd week of October 2010 I was contacted on Facrbook by Christopher Rumbaugh. This session was for Christopher’s project and he was wondering if I would like a copy of the actual mixed version of the three songs on the cassette. It was an obvious yes from me and a week later a mini disk was in my P.O. Box. It was strange to hear the songs mixed with final takes of guitar, vocals, and a cello.

I never knew that this session was ever mixed down or that there was a cello recorded on the tracks, but it is nice to have a copy of the session 18 years later. Thanks a lot Christopher.