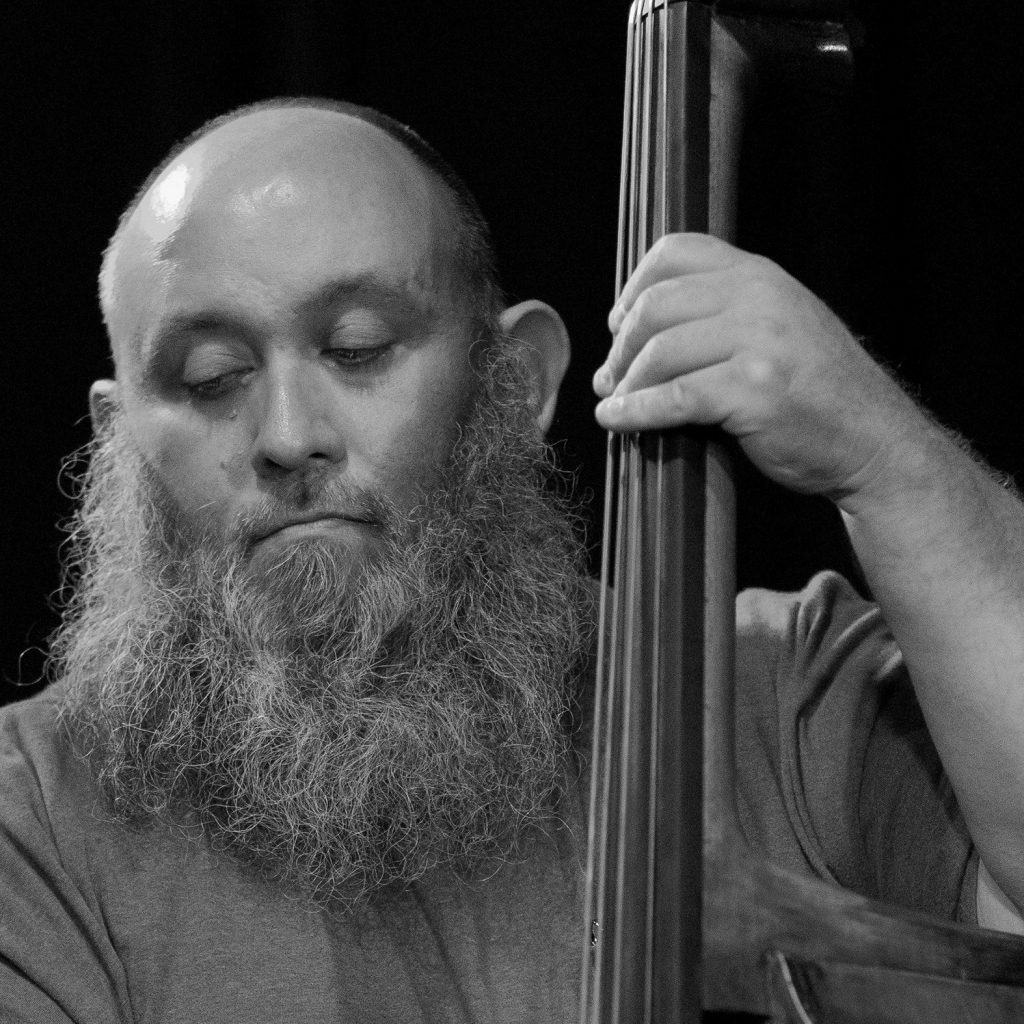 First and foremost I am a 47 year old husband and father of three.  Having established my priorities, I now declare that I am also a bassist.

I play fretless bass exclusively on my own material.  I will play fretted bass if called upon to do so for a gig or session but I do not own one that is playable.  I own an upright bass and plan to include it in my next CD of original work but it’s all about having the funds to record.

I play a 1988 Carvin LB70 fretless as my primary instrument. Neck through the body design, ebony fretless fretboard, gold hardware, koa wood body, mother-of-pearl side dot inlays, H13b stacked humbucking pickups, 24 fret two octive neck, graphite nut, v headstock, blue flame design. and wired in stereo.  I had it made for me direct from Carvin in ’88 and I love it.

I play through a GK 210 cabinet connected to a Yahmaha PB1 preamp powered by a Peavey CS400 power amp.  I have an additional two 18” speaker cabinets that I can plug in when I need a huge sound but nothing I do right now calls for that.

I also own a Dean EAB fretless acoustic/electric bass that has a nice tone and feel for a rather cheap bass.

I use no effects in my live performances but that doesn’t mean I never will.  I love a good reverb/chorus/phase mix on my bass I just never bought any yet.  I would love a loop to play along to myself.

Now that the nerd portion of the story is done here is some background of my musical journey.

Are you seated comfortably?  Then I shall begin.

I credit my being a bass player to my cousin Billy.  It was through him that I played my first bass and learned the riff that most beginning bass players learn even though it is a guitar riff, the opening of “Smoke on the Water”.  He also was my introduction to one of the greatest bass players in rock, John Entwistle.  My cousin played “The Real Me” off the Quadrophenia” album note for note right in front of me and I still, to this day, haven’t worked that one out in the wood shed.

I began playing electric bass when I was 12.  It was the summer between 6th and 7th grade and I bought a cheep $89.00 Hondo bass from Killeen Music in Burbank, CA and a leather strap.  It was your typical want to be Fender P-bass and yes, it was fretted.

I began playing in a band with my brother, Allan, on drums and our friend Lou on Guitar.  We played a few songs and Lou was helping me with the basic bass parts.  We auditioned for a talent show at David Star Jordan Junior High School and the gig was on.  Before the talent show I was replaced by a guy named Steve who was older and better than me.  I was pretty bummed but supported the band at the show.

I entered the Jr. High mentioned above and in one of my classes the band director, Keith Myatt, came in asking for musicians to join the music class.  I said that I played bass and switched my schedule to be in the orchestra.  I was under the impression that I would be playing my electric bass but when I arrived in class he handed me an upright and I was clueless as how to play it let alone with a bow and reading music.

He gave me a beginning book and put me in the small hallway and showed me the notes and basic bowing technique.  Within two weeks of spending time with my bow and the book I was playing with the orchestra.

In 8th grade I saw a commercial on TV for open auditions for the Junior Philharmonic Orchestra of California founded by Conductor, Dr. Ernst Katz.  I called the number and scheduled my audition.  In my opinion, I choked at the audition, and when the concert master, Gary S. Greene, said they already had five bassists, I felt sure it was a no.  “We would like six so welcome to the orchestra” is what came out of his mouth next.  I was handed a folder of music and joined the orchestra that night for rehearsals.  My teacher Mr. Myatt was proud of my acceptance as were my parents.  I played with the Jr. Phil for two and a half years and it was one of the best things I ever did.

I moved on to John Burroughs High School and continued to play upright and fretted electric bass.  This was the most prolific musical period of my life.  I was playing Classical, Dixieland, Jazz, Punk, Rock, and school musicals.  It was a wonderful musical period.

From 1983-84 my brother and I began a punk band called Scaterd-Few.  We played a number of shows and even recorded an album that never saw the light of day.

In 1986 I bought a 1965 Hohner fretless for about $200.00 from a guy at church that was getting married and needed to let go of a few toys.  I loved the expression of playing fretless and how it gave me a touch of the upright I had missed since graduating from school.  Its action was horribly high and I still have that bass but it has fallen into disrepair and is in need of restoration and some day it will breathe new life and make some tasty sounds again.

In 1986-89 my brother had a band called Cygnet that I was bassist for and I played my ‘65 Hohner fretless in that band as well as the bass I am about to talk about.  We played all along the Sunset strip during the long hair glam rock days.  The only problem was that we were not one of those bands.

I knew that I wanted to get a better bass so in the spring of 1988 I purchased my primary instrument, a Carvin LB70 fretless.  I love that bass!  It has a wonderful sustain and it sounds wonderful when you slap on it.  That was the requirement for my new fretless.  It had to sound close to what a fretted bass sounded like when slapped.  Here is a fun story about that time for you to enjoy.  Meeting a Rock-N-Roll Legend

I had been writing and playing from time to time at home but not out in front of people.  In June of 2008 I purchased a Dean EAB fretless acoustic / electric on-line and while I waited for it to be shipped to me I visited my sister in San Diego.  My brothers were there and my brother, Allan, and I did an impromptu Scaterd-Few set at some wine / beer bar in San Diego.  It was a lot of fun. Upon returning home to Phoenix, I mentioned to my wife that I wanted to play out again. Phoenix, AZ has a large open mic scene and there are about 5-8 venues each night you can play at on any given night of the week.

So, that is what I have been doing.  Playing at various open mic nights in Phoenix until a paying gig comes along.  It is just me playing original compositions on my Carvin LB70 fretless and throwing in a couple covers that I have worked out for bass.  The response has been great and people seem to enjoy the songwriting perspective of the bassist.  It is also a bit of a change in the lineup as many artist who play at the open mic’s are guitarists who offer up originals and covers.

I haven’t played upright regularly since graduating high school.  It saddens me but uprights were and still are out of my price range.  I know I said this earlier but I have a dream and a hope of owning one sooner than later and when I do, you will not only see me playing it but recording with it as well.

Until then, when you listen to your favorite music, listen closely to the bass line, because sometimes you can hear something that will make the song new to you.